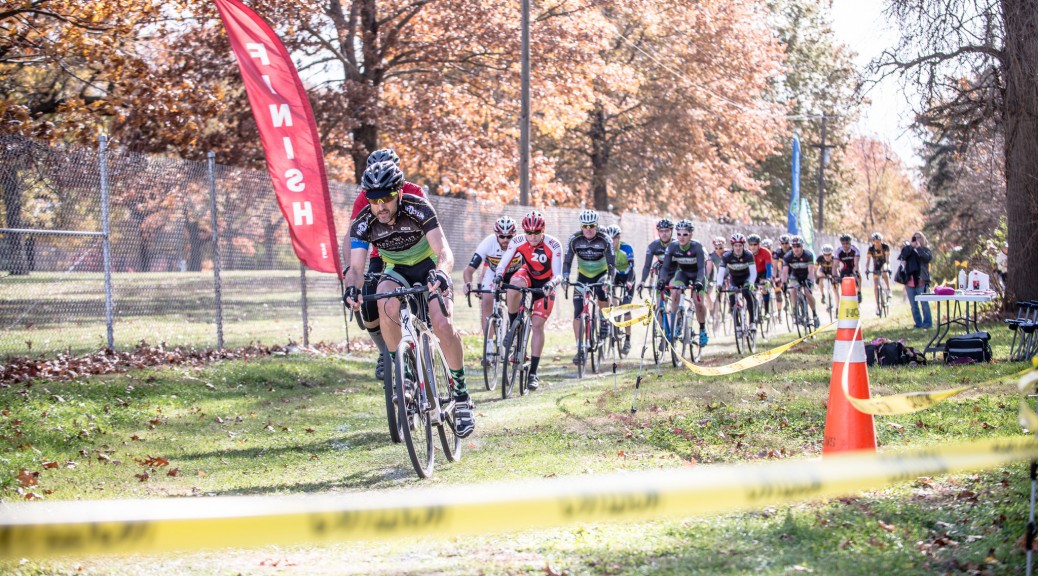 Big D Cycling and our good friend Roger Harrison put on the last race of the KBCXR series, Veterans Cycle Cross, on November 9, 2014, on the pristine grounds of the V.A. Hospital in Leavenworth, Kansas. A combination of the great weather and the “Tent City” created a very festive mood among the 137 registered racers and fans alike.  A number of riders commented that the “vibe” was the best of the year for the area’s races.

Being the KBCXR series finale and worth 1.5x points, there was some extra incentive for the racers. The recent dry weather took a little bite from the course, making it a very fast track. There were even some grumblings referring to the course as a “superhighway” before the race. Once the racers competed on the course, they felt like there was a good rhythm to the Leavenworth course and were overwhelmingly positive.

The old guys started off the festivities. In the 40+ field, Paul “Sox” Aldeguer persevered through a racing incident in the first turn to finish in third place.  This caps off a very strong KBCXR series season with an impressive second place in the strong Master’s 40+ category. Paul has been a strong cross rider for a number of years, but he took a serious jump to the pointy end of the 40+ field this season.

The older guys (50+) took off 15 to 20 seconds behind the old guys. This field contained the powerhouse contingent of Greg “Sly” Vaught, Paul “Fanch” Fancher, Chip “CZ” Zimmer and Jim “Clev” Clevenger. Clev was leading the KBCXR series by a slim margin. It was easy; he just had to win the race to win the KBCXR series. Whether if it was his lack of mental toughness or his lack of ability, he was once again defeated by his friendly nemesis, Steve Songer of 360 Racing.  Clev and Fanch forced their way through most of the 40+ field for a second place and third place finish, respectively. Sly showed that he is finally healing up from a rib injury, finishing a solid 6th place.  CZ, battling fatigue from a brutal international business trip, finished 9th. The oldest rider to exist on this planet, Frank “Q” Quinlan, had a mechanical and unfortunately did not finish in the 65+ field.

Amy VanNieuwenhuyse continued to progress on her cyclocross journey with a solid 3rd place finish in Leavenworth. Her strong engine combined with her increasing comfort with this style of racing also earned her a 3rd place in KBCXR series. We are proud of you Amy!

The highlight of the day for Big D Cycling was the men’s category 4 race, featuring our own Leo “Metro”  Simbaqueva, Stephen “Whales” Whalen and Steve “Hands” VanNieuwenhuyse.  “Hands” used his devastatingly fast start, honed at Big D’s weekly practice, to distance his rivals from the beginning.

Earlier in the season, Hands had trouble maintaining his race position through the entirety of the race. He obviously has learned much in his maiden season as he kept the pressure on lap after lap until his competitors were pummeled into submission.  Normally a calm and subdued character, Hands could barely contain his joy of his first cycling victory, seemingly bouncing all over the race venue. General consensus is that it may be his first victory but not his last.

The battle of two other Big D heroes was not quite epic, but fun to watch nonetheless. Whales got off to a quick start, gapping Leo. Some fans were wondering if Leo was applying some last minute hair products and cologne, which delayed his start because he looked and smelled…marvelous! Whales applied early race power, sensing weakness (possibly blood in the water?) with his amazingly groomed teammate/rival. The early race gap was 10 seconds. Was it enough? Leo picked up the pace and plowed through the back half of the field. Whales probably sensed, if not smelled, Leo coming. The pressure and effort was evident on his face as he strained to hold his gap. Leo was gaining 3 – 4 seconds a lap and then made the pass! No one, other than the combatants themselves, will know if words of encouragement or profanity were exchanged between the two but, either way, surely respect was earned and shared. Leo “Metro” Simbaqueva continued to add to his lead until the finish, proving that superior grooming and tenacious riding are not mutually exclusive.

Often the category 3 is a separate race, but at Veterans Cycle Cross the field was category 1/2/3. This meant that our own Tim Herre was playing with the big boys. He did not disappoint!  Tim used his trademark power, not to mention his brand new, out-of-the-box Giro shoes with camo graphics. It needs to be mentioned that Tim is the Imelda Marcos of cycling. He must have a room in his house simply devoted to his collection of cycling shoes, and most are very vibrant in color. In some circles, this has earned him the nickname of “Shoes”.

Tim and his shoes set a relentless pace that earned him an impressive 8th place in the field and first place in the category 3 field. Shoes ended up in second place in the KBCXR for the Cat. 3. The day’s effort moved him up a spot, and he was only 2.5 points off of first place. Tim served notice to the Big Boys that he will be a force to contend with.

Although the Mountain Bike category may not have had the intensity of some of the other races, it did not lack in entertainment value. Seven racers toed the start line ~ Greg “Sly” Vaught, two junior racers, two masters racers, a Whale and a Bat Chick. That is not a typo. There was a fully grown man/woman in the Whale Spout Car Wash mascot costume and a woman in a Bat Girl costume.

Sly avoided near catastrophe as one of the juniors cut him off and rubbed some paint during the starting sprint. He gathered himself to take the lead that he would never relinquish early in the first lap. He had to work a little harder than he wanted to, but finally put away one of the pesky youngsters. Sly looked strong, being his second race of the day.

Apparently, the whale costume was not constructed with cyclocross in mind. Bat Chick had to scream instructions to The Whale. Actually, screaming might not adequately relay what she was doing…she was “SCREAMING” instructions to the visually challenged whale.

The comedic value was high through the entire race, including a near racing incident when The Whale, with the help from Bat Chick, tried to put a fin on Sly as he lapped them.

As race officials were looking to question The Whale about the incident, he/she quietly retreated to the Big D Cycling trailer never to be seen again. Who was in the outfit? When will The Whale race again? Is it a he or a she?

Nick Comiskey has recently been given the nickname of the “Comet”, but his profession cries out for such nicknames as “Pastor of Disaster”, “Minister of Pain” or “Preacher Creature” with the tag line of “Religion is his profession but dealing out pain is his hobby” or “Crushing souls on Saturday but saving souls on Sunday.” This season he has just simply outclassed the category 4 field. New to cross this season, Nick hopped on the bike and was instantly quick. He has the talent, desire and a wicked competitive streak that lies beneath the nice guy exterior.

At the Veterans Cycle Cross single speed race, he definitely opened the eyes of some of the area’s top riders. This was his first single speed race, maybe even his first time on single speed bike. He bridged up to a three-man pack of category 1 riders on the second lap. First they spit out Joe Fox, and then dispensed of Britton Kusiak. Damn dude, those are some serious scalps! He was running a solid second and was assured of a podium finish when a mechanical knocked him back to 4th place. Congrats Comet!

Tim “Shoes” Herre took a 7th place in the single speed event. A fine showing, especially considering he raced two races the night before and it was his second race of the day. Shoes and the Comet will be a forceful tandem in the category 3 field, possibly even the category 1/2 field next season. You have been warned!!!

Bike racing can’t exist without race promoters like Roger Harrison and racing teams like Big D Cycling putting on the races. The cyclocross riders salute all those who volunteered! For those that are cross-curious, it is a very welcoming scene with most everyone helpful and supportive. Come out and enjoy our great sport…”Cyclocross: Where The Whale doesn’t even bite!”

Special thanks to Randy Braley for the photos in this article.