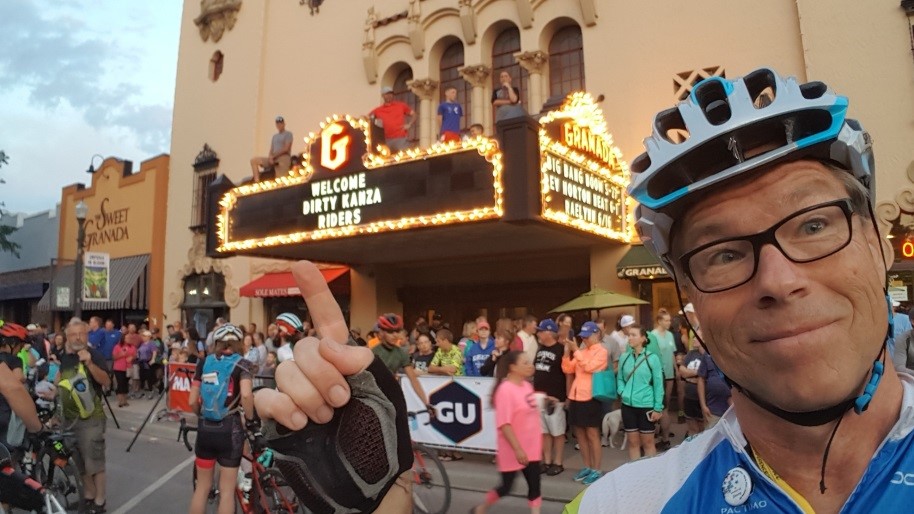 The week-out forecast for Dirty Kanza was not looking very promising. For a change, though, luck was on the cyclists’ side in 2017, and the course, weather and conditions were perfect for a gravel ride through the beautiful Flint Hills.

Tim Herre and Nigel Vaught rolled through the finish line first and second on the 50-mile course. Joe Kleidosty and Greg Vaught rode the entire 206-mile course together, helping each other along the way, to Beat the Sun at Dirty Kanza, in Greg’s first DK ride and in Joe’s second attempt at the 200-mile course. This was Greg’s longest ride on a bike! Much to Joe’s surprise, it was his longest pull for Greg to-date, as well.

Sam Hess tackled the 50-mile course this year, after unsuccessfully completing the 100-mile muddy course in 2015. Here’s his account of his day on the bike:

Growing up just west of the Flint Hills, I thought I knew what to expect; I had ridden lease roads and cow paths in my teens. Boy, was I wrong. My first attempt at the Dirty Kanza was in 2015. Let me stress “attempt”. I figured I could just go out and do the DK 100 without much, if any, training on actual gravel. Before we reached the cattle pens, I found a blacktop road, bailed and headed back to Emporia; I had already carried my bike 6 or 7 miles due to the monsoon the days and night before … mud was everywhere.

Fast forward to 2017, with Joe and Greg talking gravel and taking a serious attempt at beating the sun in the DK200, I thought what the heck, I could do the DK50 with Nigel. So, I signed up again and took a more serious approach to my training (I rode gravel in south Johnson county 8 to 10 times before the DK and considered myself prepared). My goal was to not lose Nigel (Greg, or more likely Denise, Nigel’s mom, would kill me) and try and accomplish the 50 miles in under 3 hours.

The weather could not have been more perfect. At starting time, it was about 64 degrees with an expected high for the day of about 80 and a mild south east wind of only 4 MPH. It was a perfect day. The gravel roads were dry-packed from the early spring rains. Jim Cummins, Dirty Kanza co-founder and gravel expert (and high school buddy), stated at the start that the roads were perfect. They are called “Hero Roads”, meaning fast, cautioning all the riders not to get too carried away early on and burn all your matches.

I did not accomplish either of my goals. By mile 8, Nigel took off and all I saw was his orange helmet in the distance. I also didn’t quite make the under 3-hour time frame I set for myself. Nigel finished second, just behind and with Tim Herre, at just under the 3-hour mark. Their time was 2:59.26, an incredible feat for a 14-year-old (congratulations to Tim also). Enjoying the ride, I finished not too far back, tied for 7th place out of 289 cyclists @ 3:06.18.

It was an “awesome” day of riding. I believe both Nigel and I are looking forward to the DK 100 next year. I hope to see to more Big D teammates out there next year!

Jay Raupp conquered the 100-mile course, while at the same time completing his longest gravel ride to-date and also completing his first ever organized gravel ride! Here is Jay’s account of his day riding through the Flint Hills:

Dirty Kanza has an aura you can feel at the start. It has the inspiring Flint Hills, with its green scenery and vistas that you can never see from a drive on I-35. It has gravel roads you can fly on with your new 38 gravel tires, and also low maintenance roads that bring your cyclocross experience to play. This year had perfect, dry, windless weather and none of the legendary long walk toting the bike through mud, nor the derailleur-snapping, ‘peanutbutter splatter’ that first timers like me feared. It did have a half dozen creek crossings which were new to me, so I just did what the riders ahead did, which was go right on through and hope for no rocks.

One rider I met had hit a rock and flipped and got a gash from it. Another rider had flipped on the wooden bridge the map identified as unsafe – yes it was. I learned to identify surprise bumps and holes that lay ahead by noticing how many water bottles were already in the road. I wondered how anyone would ride on after losing their drinks. The best rides are shared with teammates and so it was this day, as I joined in the last quarter of the ride with Alvaro Gamarra, Reinaldo Barrera, and Christian Vila. Two were on mountain bikes, making quick work of the bad roads but still rolling very quickly on the gravel. I was getting lost, so might still be out there without them to ride with, and we finished together at 6hr 41min, a bit under 15mph. Thanks, guys! Also thank you to the Never Let Go Fund, who was my support team on the course.

Special thanks to our title sponsor, Keen Wealth Advisors, for their tremendous support of our team.