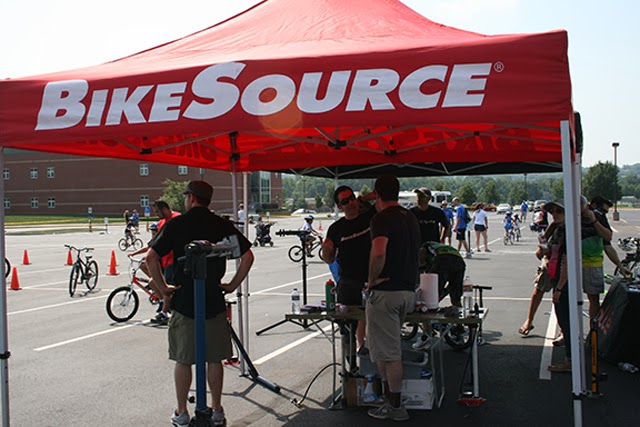 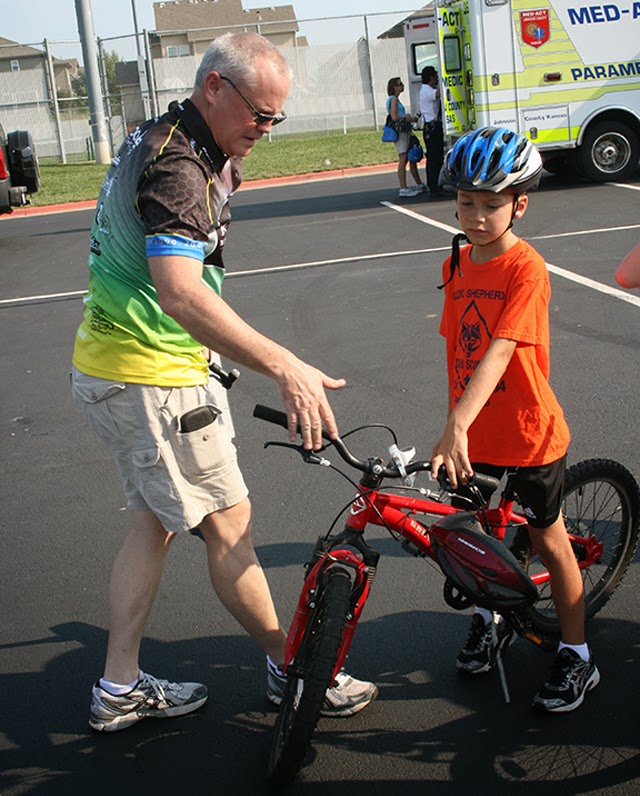 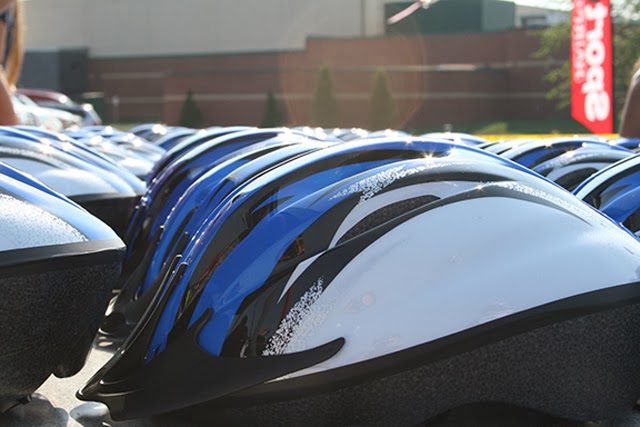 This has become an annual charity event for Big D Cycling with many members of the team donating their time and energy to insure the children of our community are cycling safely.

The second half of the summer road season saw some good results and a few surprises. Here’s a recap:

At the Tour of Lawrence the Cat4 KBAR race came down to the last races of the series, with Joe “Mongo” Kleidosty neck and neck with Local’s Vince Delaughder and Travis Tesone of MMC. It came down to a few points between them so a good result by any would have made all the difference. In Saturday’s very technical road race, Mongo lost a bottle and had some mechanical issues which kept him out of the points. Tesone had a decent result in the Crit the following day, which left our power four out in the cold. Kurt Wilson placed 4th in the road race, Donavon Hottman grabbed 8th and then 9th the following day in the 60+ races , while teammate Bill Mason snatched a top ten spot in the crit. Lynn Wilson took 6th in the open women’s RR as Rochelle Scleicher took 1st in the RR and 4th in the crit. Schleicher was dominant throughout the KBAR season and it wasn’t even close for her as she sewed up the contest long before ToL.

We had some great results from our Masters at a watered-down Sunflower Games, but the big highlight was Noah Collins who took podium spots each day and walked away with the omnium title in the Cat4. Collins has a great career ahead of him, and should be looking good next season as a young Cat4.

The State Line RR was one of the season’s most miserable events, plagued by a chilly downpour but Paul Aldeguer finished 3rd in the masters while Rochelle Schleicher came in 7th n the women’s open. 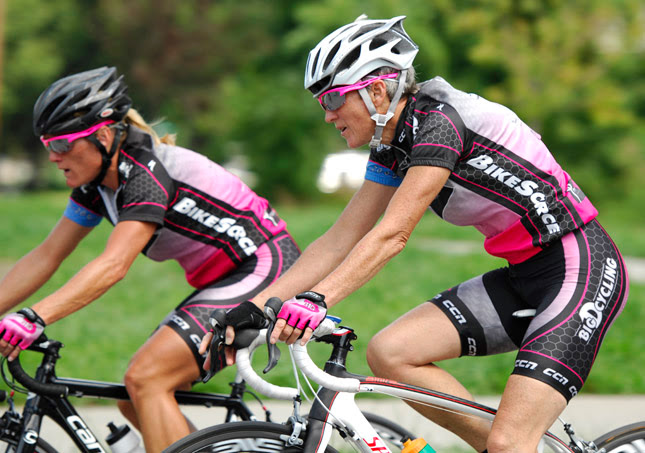 A new event on the calendar this year was the Cathedral Criterium held in Kansas City Kansas. It was a crit-heavy season and the sprinters enjoyed having a lot to choose from. On day one Shawn Knight and Kurt Wilson took 2nd and 5th in the 4/5 race and Kurt followed up the next day with a 9th place, with Knight coming in right behind him. Schleicher took first ahead of Lynn Wilson’s 2nd in the 3/4. Wilson got two more second places the next day and Rochelle got two fourth places. 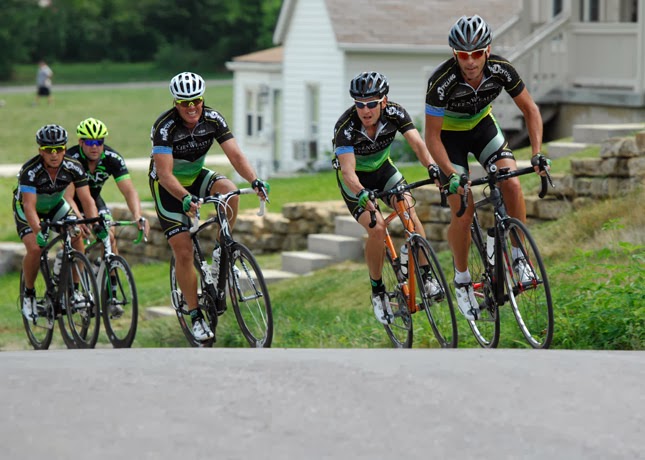 At the team co-sponsored Buffalo Bill Criterium in September, Noah Collins came in third in Cat4 with the help of super-domestiques Kurt and Shawn. In the 40+ race Kurt took 1st and Shawn came in 4th. The 50+ race had Jim Clevenger coming in 1st, Ron Marney 2nd, Greg Vaught 3rd. Stephen Whalen got 6th. Frank Quinlan was 2nd in the 60+. Lynn Wilson and Rochelle Schleicher grabbed top spots in the open and Cat4 women’s races respectively.

The Tour of Kansas City Returned for it’s 50th consecutive year. The three-day event saw it’s share of spills and upsets, but Big D managed to keep it together for the most part.

Saturday’s New Longview course was the usual sprint for the first corner and try to maintain position for the rest of the race. This was a course for cornering and climbing, with eight turns and a long uphill section. South winds mitigated the hill somewhat, but riders had to face gusts up to 30 mph coming back into the finish straight before negotiating the hill once again.

In the Cat 4 race it was mayhem with several crashes. Noah Collins was involved in one, grabbed a bike from a teammate and then proceeded to crash again. Noah ust really dig going down on the tarmac! Kurt Wilson stayed out of trouble and landed himself into the lead group. He finished 8th.

Lynn Wilson finished thid in the women’s 123 and then followed up on Sunday with a sixth place in that race and a third in the 3/4’s. Bill Smith looked strong in the men’s Cat 4 with a top-ten finish!

The team showed up in force and grabbed some KBAR points at the KS state TT championships in Walnut. The course was a rolling L-shape jaunt that went to the east and then south for 20K each way. Some of the other categories had a shorter distance, but everyone competing suffered in the race of truth.

Rochelle Schleicher and Susan Ruettimann won State Champion gold in their respective categories. Schleicher got first overall in Master and Ruettimann got second overall, but won her age group. Josie Measures was close behind in third. In the Cat4’s the ladies pulled in second (Bree Ginden), and third (Alissa Stinnet) and in the 55+ masters, Roberta Dierks grabbed third.

The boys in green as usual trailed a bit behind their pink-clad teammates, but still had a strong showing, most notably with Jim CLevenger’s third place in the masters 50+. Newcomer Bill Smith got fifh in the Cat4’s while Joe Kleidosty and Shawn Knight wer sixth and seventh.

Rounding out the Masters 60+ field were Bill Mason fourth, Patrick Bunch in seventh, Bill Wells in 9th and Donavon Hottman in 10th.

Wichita hosted two days of criterium racing to start out the month of June, with the Bicycle X Change Crits on Saturday and the SPECS Wichita Riverfest Crits on Sunday.

Saturday was a big day for the team with a couple of top finishes and a bunch of primes.
Joe Kleidosty got his second big win as a four this season, with a first place in the Cat4 race. The green was controlling and attacking all race, with Kurt Wilson and Shawn Knight leading the charge. Dan Ruettimann stepped up early on and grabbed the first prime sprint, then had a big gap with another rider. They held on as long as they could, but the pace was just a little too crazy back in the field, so they got swallowed up within a lap or two. Kurt Wilson grabbed prime #2, and managed to keep on attacking the field until a mechanical slowed him down. With two laps to go, Knight and Kleidosty got set up near the front of the pack. Joe launched his final push with a crazy amount of distance to the finish, and Knight was on his wheel the whole way. Instead of launching himself for the win, Knight held back so the competition would have to come around him to try to get the win. Special K kept putting the heat on all the way across the finish, with Knight two spots behind him in third.

In the Masters 40+ race Knight got 7th and Jim Clevenger came in 10th. The first race of the day was a bit chilly, but got our riders used to the cobble section which transitioned to concrete. Potholes and cracks were all over the place so you really had to pay attention.

Lynn Wilson once again took control of the Women’s open field with the help of Rochelle Schleicher, who chased down the breaks and kept tabs on the competition from VeloTek and Tom’s of Tulsa. Wilson grabbed a prime along the way and sprinted for first while Rochelle stayed cozy and let the competition do the chasing. She came in sixth nonetheless.

On Sunday the team did not fare quite as well, but did pick up a few top-ten spots and a couple of primes.

The Chica Ds were marked women in the open race against a stacked VeloTek field. With a break about halfway through, Rocky and Lynn were under pressure to shut it down but two motivated riders ahead combined with some solid tactics by the team from Lawrence made it difficult. The wind also worked against them, as it seemed like it was always in the face of the riders by the afternoon races. Wilson did well to pick up fourth and Rochelle turned in a respectable 11th.

The other bright spot was Jim Clevenger’s performance in the Cat3 race, which he kind of decided to enter at the last minute. He was at the front the entire race and came around to the final sprint in a group of about six riders, who had a slight gap on the field. Third place for Jim to cap off a pretty successful weekend for him and the team in general. Jim had a seventh place finish in the 40+ race where Shawn Knight also did well with a top-ten. In the Cat4 race Knight took seventh while Wilson and the rest of the fast 4s finished together 13th-16th.