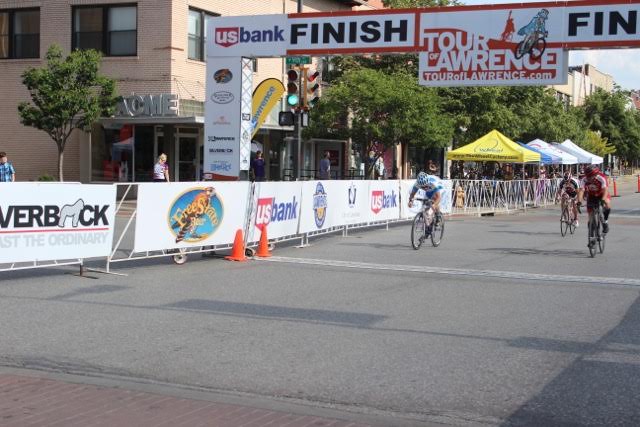 Jay Raupp, and his wife Kathleen, joined Big D Cycling in 2015. Jay has attended almost every KBAR race event this year, and he has shown improvement as the season has progressed, culminating with two, second-place finishes at Tour of Lawrence on the last weekend of June.

I asked Jay to give me some of his thoughts on the weekend, after he was done counting his winnings.

Following are the reflections of a man, who is not quite 60 years old, but he gets to ride as if he were 60 years old. Yet, he rides like he’s 40 years old…

Watching the Masters 40+ Tour of Lawrence race go by Sunday morning at tire-numbing speed made me thankful that USA Cycling ages its racers in horse years, so that, as a 59.8-year-old, I race up in Masters 60+.

We do our own brand of racing in our drive for points toward the Keen Cup.  No one wants points more than Reg Robertson, who had an incident on the 15-corner Haskell Campus course on Saturday. Reg finished that race, and on Sunday, he rolled out onto Massachusetts Street looking like a 12-speed M*A*S*H unit, going after more KBAT points.  What great spirit Reg has!

On two beautiful mornings for racing, we gave our rivals all they could handle.   Despite my mantra of ‘Don’t Let Dean Parker Get Away’, he did so with a half mile to go  on Saturday, winning by three seconds.

On Sunday, he was picking up cash all over.   Literally.    Cruising to the start, he stops, reaches down, and picks up a dime.   One lap into the race, where our Masters 60+ field of 10 included Reg, Donavon Hottman, Frank Quinlan, and Bill Wells, a $100 prime was announced. Dean used his motor to go pick up more cash, tooling away too easily.

I caught back on while he was considering which of the many cool downtown Lawrence shops he should go to for a shopping spree, but with me were two of his 360 Racing teammates.  Then, a merchandise prime came up, and Dean was gone for good.

A surprise third prime was put up for the field, and the real surprise was, I got it.    The downtown Lawrence criterium course is so much fun, with the little rolls and fast corners and excellent course control by the corner monitors.

Though Dean took first, I was able to conserve enough in the race and obtained a lead-out off Andy Brown of 360 Racing, winning second with a bike throw.

Special thanks to Donavon for hosting the team’s Tuesday night criterium practice we used to tune up for these races. Thanks to Joe Rehm for attending the races and obtaining the finish line photo. I can’t wait to spend some of my winnings at BikeSource, our local bike shop with great service and products!