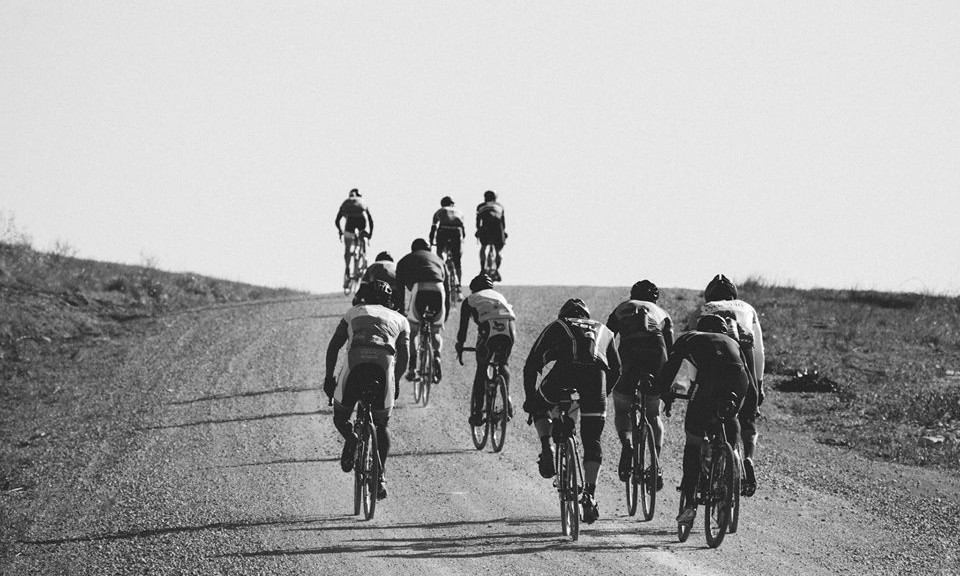 Big D Cycling, fresh off being named 2015 Masters Club of the Year by USA Cycling and following 2015 Kansas Best All-Around Team titles in Men’s Masters Road and Cyclocross, is making a strong push into gravel racing in 2016. The team is strong across several age groups and also in the Fat Bike/Mountain Bike category.

Promoter Roger Williams gave the team its first local opportunity to race gravel with his 2nd annual Gravelleurs Raid and Gravel Grinder.  The first edition of this race was delayed by rain in 2015. The 2016 edition was met with below average temperatures and some brisk winds that would play a factor with this year’s race.

As racers lined up for the start, the temperature was in the low- to mid-30s. After the neutral roll out on the levee trail, the Tradewind Team, including Steve Tilford and last year’s winner, Brian Jensen, set a brisk pace that had it strung out in cross winds. After a while, racers were dropping off the back.  Aaron Sims went through a huge pothole, dropping back while looking at his bike. Another Tradewind rider dropped a bottle ~ yep, pretty rough roads to begin a race!

About six miles into the race was the first major climb, causing immediate separation among the racers. Another five miles into the race was the King of the Mountain climb, steep enough to cause many of the Grinders (50-mile racers) to walk up the climb. It was at this point that the lead group and chase group were formed. The pace was above 20 mph in the first 20 miles of the race.

Tilford, Jensen and Ashton Lambie were in the lead group. Joe Kleidosty and David Neidinger bridged up to the lead group around mile 16, but were subsequently dropped within a mile when Jensen decided he did not want to get to know these riders at all!

A chase group of five was formed, including Kleidosty, Neidinger, Kurt McKinsey, Mark Smelser and Jason Laidlaw.  Cody Jones eventually made it up to the group, only to get dropped again when he had to take a nature break before the 55-mile neutral SAG.

The chase group made quick business at the SAG and took off ahead of Jones. Jones eventually made it back to the chase group, though.  After some good work together after the SAG, McKinsey made a move to get clear of the group. Jones immediately recognized this as an opportunity, and bridged up to McKinsey in no time.

Kleidosty waited for a good moment to get clear of the chase group, as well. Smelser stayed with Kleidosty for a while, but could not match the pace, allowing Kleidosty to bridge up to McKinsey solo. By the time Kleidosty made it up to McKinsey, Jones already dropped McKinsey and was drilling it to the finish line.

With no chasers in sight, Kleidosty rode with McKinsey, not doing any work. It was difficult to see who was racing 50 miles or 102 miles. The final climb on the course was a challenging one, especially after 95 miles of racing! Kleidosty paced himself up it, looked back and McKinsey was not in sight.

Thinking the last six miles, on flat roads, would be easy was a misjudgement on Kleidosty’s part.  The winds had picked up, and they were a mix of head and crosswinds. Not knowing if McKinsey, Smelser or Neidinger were chasing him, Kleidosty kept the pace up until the finish line.

After the gravel dust had settled, it was learned that Lambie was also dropped fairly early in the race, so he was working by himself for much of the race. Jones was able to work his way up and past Lambie to secure 3rd overall (2nd in 30-39 age group), behind Jensen and Tilford, 1st and 2nd, respectively.  Kleidosty crossed the line 5th overall, 1st in the 40-49 age group. Jensen and Tilford finished approximately 23 minutes ahead of Jones, with Kleidosty three and half minutes behind Lambie and five minutes behind Jones. 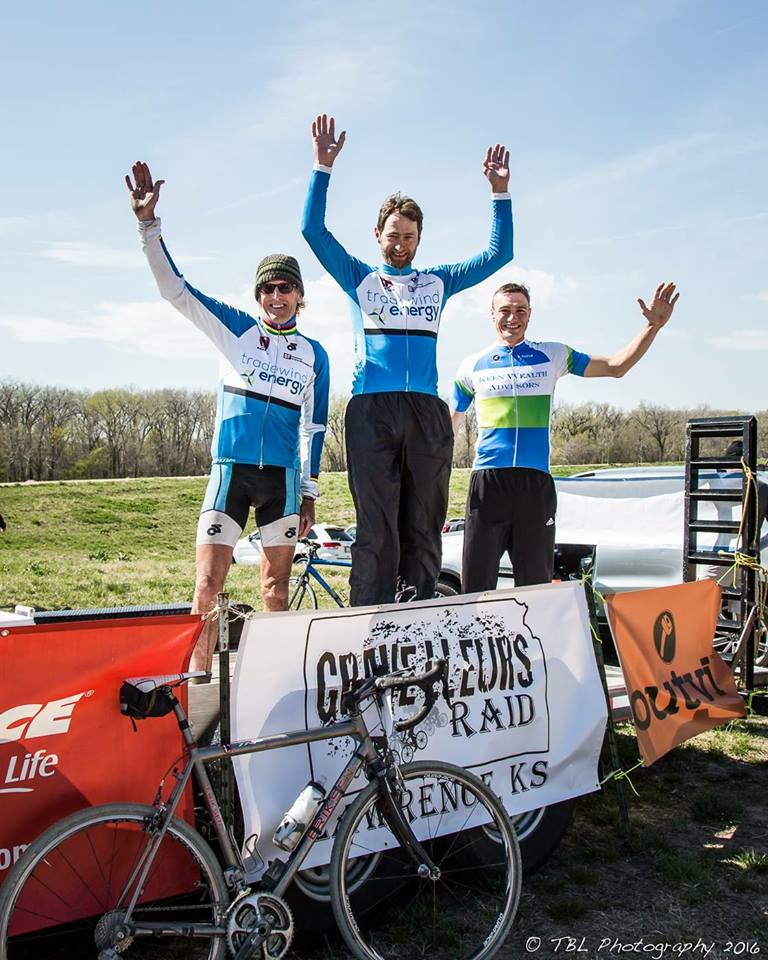 Jones on the podium with Jensen and Tilford, a proud moment for this young racer! Photo credit: Jason Ebberts of TBL Photography

Reinaldo Barrera and Alvaro Gamarra rode fatbikes to 2nd and 3rd, respectively, in that category.  This is a challenging course with approximately 6000 feet of climbing, so to complete that on a fatbike is no easy task!

John Field (13th in 50+) and Tim Herre (7th in 30-39 age group) also finished the race with great times, where several DNFs were recorded.

Keen Wealth Advisors knows how to guide its clients through rocky times, so it’s not much of a surprise to see Big D Cycling doing so well on gravel roads!

Click the links on racer’s names to see them in action on the course, with excellent photos by Jason Ebberts of TBL Photography.

Special thanks to Roger Williams and his volunteers for putting on a great event in 2016. Word to the wise: don’t delay in registering for this event next year … fields are limited to maintain a high quality event!