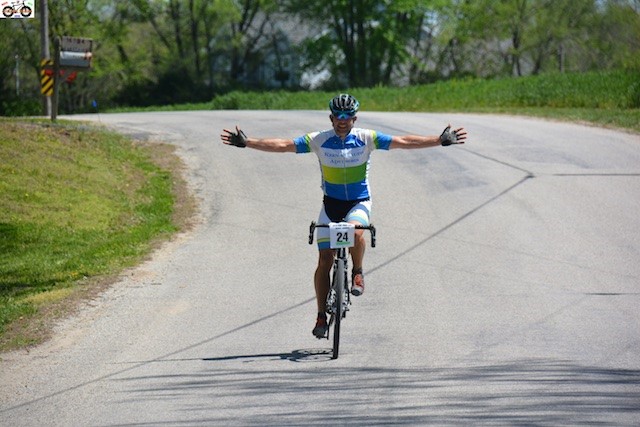 The second edition of the Cool Hand Luke Gravel Grinder was different from last year’s wet and muddy event, but it was definitely not less challenging.  The challenges came in many forms: locked-up Garmins, quick starting pace, heat, high winds and technical sections on the course.

Joe Kleidosty faced all kinds of struggles during this event, including a bad Garmin file for the race course, which locked up his Garmin for the first 12.5 miles.  Other racers were also having issues with the Garmin file.  I guess you could say it was a failure to communicate, which seemed fitting for this gravel race (and yes, Kleidosty felt just like Cool Hand Luke after the Captain struck him in this video link).

Brendan Sheehan started the race with a neutral roll out behind his red pickup.  Kleidosty stayed directly behind the truck and when Sheehan took off, Kleidosty took off.  Within two miles, racers were upon the King of the Mountain climb, with some pitches over 16 percent. Kleidosty led the way onto the climb, when a cow suddenly darted across his path! Brian Jensen effortlessly made it to the top of the climb first, with Cody Jones and Kleidosty close behind.

Jones made it up to Jensen. Ashton Lambie bridged up to that duo after another decent climb at the 4-mile mark.  At that point, Kleidosty was with Kurt McKinsey and another racer, chasing down the lead group.  They were keeping pace with the lead group, but lost the third person at the 16-mile mark.

Around the 80- to 85-mile mark, David Collins and Curt Shelman caught McKinsey and Kleidosty, setting a strong pace down River Road.  McKinsey latched onto them with ease, but Kleidosty was struggling to get back on with them, as the early race exertion had taken its toll.

Collins was on the front and missed a turn at the 93-mile mark, locking up his brakes. Kleidosty and McKinsey continued on and stayed together until the final climb around the 97-mile mark.

Kleidosty rolled in third overall and first in Masters 35+ category.

Greg Vaught returned to Cool Hand Luke to improve upon his showing last year, where he had to improvise and ride with a broken spoke and no rear brakes.

Vaught paced himself on the first portion of the race and bridged up to Roger Williams by the first checkpoint. They worked together until around the 91-mile mark, when Vaught rode away on a hill and just kept going. His efforts yielded him 10th overall and 2nd in Masters 50+!

Cody Jones experienced a mechanical just before the first checkpoint, causing a delay of more than an hour on his ride. He had a great race up to that point and chalked this one up to Dirty Kanza training!

Tim Herre came in just ahead of Jones, placing in the top 20!

Kleidosty made it a point to thank Shelman for Chamois Butt’r’s sponsorship of Big D Cycling after the race. It sure came in handy on this ride!

One cow, two podiums and three in the top 20: quite a day for Keen Wealth Advisors’ Big D Cycling team!